CORK COMMUNITY ART LINK
Laura Pauwels has been involved with CCAL in many various ways over the past decade through volunteering/ workshop facilitator/visual and performance artist/ fundraising / project manager and most recently General Manager over the past year. Her love for CCAL shows in her dedication and her long-standing collaboration with the charity and her multiple talents have greatly benefited the work we do. Laura holds a masters from UCC in performance and human rights and believes in the transformative power of the arts in social contexts. 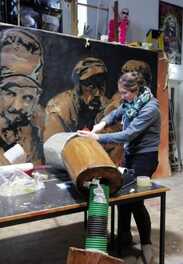 With a background in fine art and drawing, Beibhinn started on a Community Employment Scheme in 2017 and found it was an amazing atmosphere to work in from the beginning. Over the years, she has been a crucial part of CCAL artistic programmes as her many talents shine through consistently. She is now Assistant Artistic Director and we are lucky to have such creative talented hands as part of our core team. Beibhinn enjoys working with people in various community settings and witnessing the thrill and magic of parades. For her, Cork Community Art Link is a place for everyone to get involved - you don’t have to have a background in art or know what you want to do, it's all about the sharing of skills.
​
Sam Hamilton
​Lead Technician 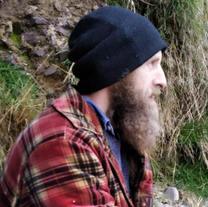 With a background in metal work as well as theatre performance and production, multitalented Sam has been involved with Cork Community Art Link since 2006. Over the years of creating giant floats, metal frame structures as well as devising and leading drama workshops, Sam has proven himself to be an essential part of our team here at CCAL, he is now the Lead Technician for CCAL parades and also runs numerous workshops with various community groups throughout the year. ​
Eamonn O’Sullivan
Transport and Logistics 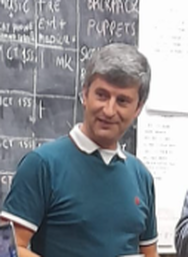 Eamonn has been involved with CCAL for many years now. He is a great asset to our team as he is a man of many talents. During our projects throughout the year Eamonn is in charge of transportation and logistics which is of course an essential part of the work we do at CCAL considering we need to move giant floats safely. His expertise does not end there however as he also knows his way around mechanics and has been able to provide significant assistance to CCAL on this front over the years. 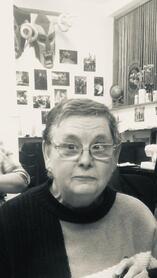 Liz joined the team at CCAL in September 2022 as an administrator. She is involved in many projects and you will probably find her volunteering in a few places you might know around town :) Liz wanted to work at CCAL as she was drawn to our work with the arts and local community, she enjoys being a part of every aspect of what we do as a community arts charity. ​
Anna Marie Whelan
​Administrator
​info@corkcommunityartlink.com ​ 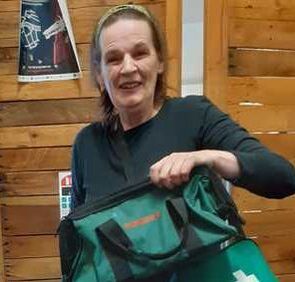 Anna Marie has been involved with CCAL for the past twenty years. She is dedicated as well as hard working and Cork Community Art Link benefits greatly from having her around for all this time. Having served as Board Member for many years, she has decided to join our core team at the Lido as an arts administrator since 2022 which we are very happy about. Anna Marie fundamentally believes in free access to arts for all and understands the value of community work. ​
Agata Kozłowska
Arts Worker on TUS placement 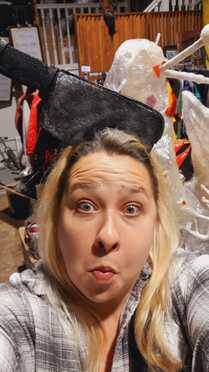 Agata started in CCAL in 2021 on the TUS programme. At first, she was wondering if she would be able to follow as she had not previously worked in art settings but soon learned that everyone, if given the chance, can develop skills they didn’t necessarily know they had! Over the past year Agata has opened herself to creativity and has made some beautiful pieces as well as participated to many community workshops. Her favourite moments however were most certainly performing in our various parades as Agata also found a dormant amazing performer within herself ready to pounce now at every occasion ;)
James Cummins
Arts worker on TUS placement 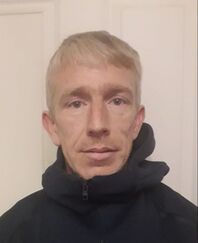 James started working at CCAL in 2022 and we are very happy to have him as part of the team. With his experience in lighting design, stage technician as well as general assistant in Cork Arts Theatre over several years, his enthusiasm and expertise surely comes in handy throughout our various projects. James is interested in arts, design, performance as well as working in community settings.
Charlotte Tsai
Arts worker on CE scheme 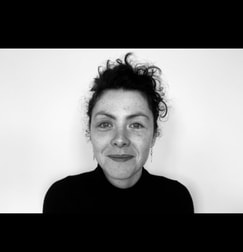 Charlotte returned home to Cork from London during the pandemic. She trained and worked as an actor around the world but longed for a sense of  purpose towards community and to discover vital lost skills in making practical and artistic work. Joining Cork Community Art Link has quickly revealed that being amongst people with a shared idea of empathy and of equalising society through our individual as well as our shared creative impulses is the most effective way of harnessing confidence and positive change. She also loves any opportunity to Dance in the Street so her initiation to the Dragon of Shandon this year was just the right place to be!
Raffaele Muraca
Contracted Arts worker / Facilitator 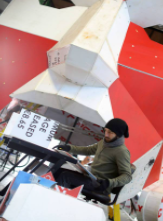 Visual artist and facilitator, Raffaele has built his experience in prop and float-making over his many years of involvement at CCAL. He studied Fine Art at Brera Art Academy in Milano and then graduated with a Bachelor’s Degree in Pedagogy. He worked for several years in Italy as an educator/facilitator with teenage refugees, organising cultural events and social activities bridging cultures and establishing social integration using various forms of art as a medium. Raffa believes in the power of the arts as an empowering way  for creating culture and developing people’s growth.
Podge Daly
Contracted Art worker / Facilitator 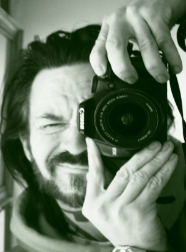 Podge graduated from Cluin Mhuire school of art and design in Galway with a  Degree in fine art and from the Huston Film College in N.U.I. Galway with a masters in production and direction. He spent 15 years producing group and solo exhibitions, plays and short films and   10 years in N.U.I.Galway as the head tutor of the arts society running life drawing, still life, sculpture classes and more. Podge is a contracted artist and facilitator at CCAL and we love to have him as he is as witty as talented and that’s saying a lot. Podge is co creator and facilitator of the comic book making classes at CCAL, a course which has proven to be very popular of the past couple of years. ​
Colin O’ Mahoney
Contracted Facilitator 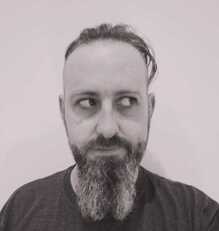 Colin O’ Mahoney (he/him) is a writer and freelance editor who facilitates creative writing and comic-making workshops for all ages. He is passionate about the benefits of creativity and self-expression for young people, and in Cork Community Art Link has found a home for these beliefs - an organisation that is dedicated to bringing art to everyone in the community, and allowing them to experience the positivity, collaboration, and sense of place that comes from sharing art with others.
Trish Burke
Contracted Drama and Theatre Facilitator 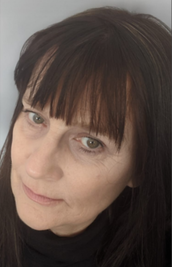 CCAL is delighted to be able to count Trish as Drama and Theatre facilitator since 2021. Over the past year, she has developed many performances with community groups for our various parades and people have been very happy to partake in her evening workshops. With her experience of working through the medium of performance with people with disabilities as well as community work, Trish has felt right at home at CCAL from the very beginning. ​
Director: Pat Noonan

Pat Noonan joined Cork Community Art Link as a board member in 2017.

His active involvement in the construction, motorcycle and dance communities showed him the importance of the creative arts. Pat shares CCAL's values of accessible and inclusive art projects for all.
Chairperson: Guillaume Cousson

Guillaume is a performer who is characterized by the diversity of his bodily expression - a fusion of circus, dance and magic arts that he combines to create performances. In 2011 he set up the company RIUCHI that has been touring successfully since then across Europe headlining various types of festivals. Later in the process he created ROGU with world renown fire performer Ronan McLoughlin which established itself as the foremost fire company in Ireland. Guillaume has won many accolades such as Next Generation Artist Arts Council 2016 and he’s a member of the prestigious French Magic team representing France at international competitions.
In addition to performing and touring, Guillaume Cousson has also been the managing director of Cork Circus Factory from 2013 to 2016 and was a board director of ISACS in 2016 and he's currently the board chairman of Cork Community Art Link. He also works as a consultant with established and emerging companies creating, mentoring and devising financial and marketing strategies.
Secretary:​ Rose-Anne Kidney
​
Rose-Anne Kidney has run her own event management/production company ‘Goldiefish Events’ since 2006, where she has worked as a freelance project manager and producer in the Cultural Sector.
Rose-Anne has an interest in working on site specific events and festivals and has worked with many festivals in varying roles in the cultural sector; Cork Jazz Festival, Cork Folk Festival, A Taste of West Cork, Ocean to City Race, Cork Community Art Link’s Dragon of Shandon, Shandon Street Festival, Mad Pride, Feast, Culture and Chips Festival, Limerick, Midleton Food and Drink Festival, Cork St. Patrick’s Festival, World Book Festival to name a few.
She has Project Managed many events for local authorities including Cork City and County Council and Limerick City and County Council and has worked as a freelance production manager with the CIT, Arts Office.
She is currently working as a project manager with The Cork Midsummer Festival as well as continuing her own freelance work.

Louise joined the organisation as Manager of Cork Community Art Link in  2016 for one year.
Louise has a background in Arts Management and has worked in the arts sector for many years in both a creative and administrative capacity.
She has previously worked with the Office of Public Works in Management of the State Art Collection, at the Royal Hibernian Academy and with the Cork International Choral Festival, in addition to working on many projects as a freelance arts manager. She has wide-ranging festival experience and is founder and Event Director of the annual Vantastival music festival in Drogheda, Co. Louth.
Cork Community Art Link wishes to inform its members/users it has started working to reach compliance with the Governance Code. This is a code of practice for good governance of community, voluntary and charitable organisations in Ireland which has been developed by the sector for the sector (see: www.governancecode.ie).