The Dragon of Shandon Samhain Project was established in 2006 as a response to the absence of large-scale cultural and arts events in Cork City’s Northside as identified in our 2006 public survey (WhatIf... Shandon) and multiple conversations with individuals and community organisations from these areas.
Since then, it has been an annual source of creativity and pride, and has become Cork’s largest and most notable night-time parade and considered the most inclusive arts annual event.
Production on the Dragon of Shandon in 2021 began in July, with discussions among CCAL’s Artistic Director, Assistant Director, Project Manager, administrators, art workers and contracted artists.

Due to the restrictions in place preventing the intensive community outreach and workshop programmes usually leading up to the Dragon of Shandon, it was impossible for the parade to take place in 2021 in its usual form.

Instead, CCAL’s crew worked to safely design and create a series of engaging artworks for installation at Halloween in Cork City, following the Dragon’s usual parade route and designed to be enjoyed by the public without amassing large crowds in any one location at the same time.

CCAL has adapted to restrictions very successfully, and have hosted a number of online and installation events over the past 18 months, with an emphasis on participation at the heart of our activities.

In past years, an average of over 200 hours of free workshops are provided for community groups and individuals. Over 30 groups participate annually, boasting up to 500 participants walking in the parade on the night with up to 15,000 spectators.
The programme outcomes include:

As part of the Dragon of Shandon programme in 2021, starting in September, CCAL hosted Comic Making workshops, facilitated by Writer Colin O'Mahoney and Artist Podge Daly, to create the fourth issue of Boo Boi!, a comic book created annually inspired by the Dragon. Two series of workshop groups ran simultaneously: one for children ages 9-16, and the other for adults. These workshops resulted in a 24 page comic, which was printed and distributed for free to the public by the comic makers as part of the activities on October 31st.

A series of cut-out pastings featuring various creatures who usually animate the parade were mounted around the walls of the Craft Centre of part of the Shandon installations for Halloween.

Each of these (7 individual pieces in total) were drawn, cut out to create a stencil, projected, drawn and cut out on large sheets of paper, pasted onto wooden panels and varnished in order to protect the artwork from outdoor conditions.

In late August, CCAL reached out to some of the groups who usually animate the parade to devise performance at various locations on October 31st. Our goal was to continue to platform the contribution made by each group, and bring the spirit of The Dragon of Shandon to Cork City while working hard to continue adapting with the changing restrictions.
​
First year students from University College Cork Department of Theatre, as part of their college programme, created an engaging series of performances, integrated with the installations in Shandon. CCAL facilitated their costumes from our stores, provided face painting materials and gave artistic direction for face painting for the night. Performances included a shadow theatre piece, many diverse characters created by the actors to bring life to our garden installation and the Shandon area, and guide the public through the ‘birthplace of the Dragon’.
Continuing our collaborations with UCC, our Artistic Director facilitated a four week series of workshops with Masters students from the Department of Theatre in animating our Skeleton Puppet troupe. These engaging performances are always a favourite for the Dragon of Shandon, and the feedback from the students operating them was hugely positive.

Cork City Samba have been a staple of the Dragon of Shandon programme since 2014, and brought their usual spirit, creativity and music to the celebrations in 2021. CCAL’s artists and volunteers created masks for them, and they performed in collaboration with CCAL’s skeletons, delighting spectators.
The final group who performed on Halloween night were the dancers from Joan Denise Moriarty School of Dance, who continue to amaze and delight annually with their stunning costumes, inventive facepaint and highly considered choreography. The passion, creativity and commitment to excellence from this group makes them deeply exciting to work with, and the positive feedback from the dancers and facilitators on their involvement in the Dragon annually is very inspiring.

The artworks and installations began in The Gate Cinema, North Main Street. The Gate has supported the Dragon of Shandon through the screening of advertisements in aid of funding before films screened in past years, and gave permission for CCAL to use the space above the entrance as an installation site. CCAL housed our ‘Jazz Trio’, an ensemble of skeleton figure sculptures, which were in place from the 26th October - 1st of November. As part of the activities on Halloween night, CCAL approached SpookScreen Film Festival to programme and screen a collection of Cork Horror Shorts, with free entry. 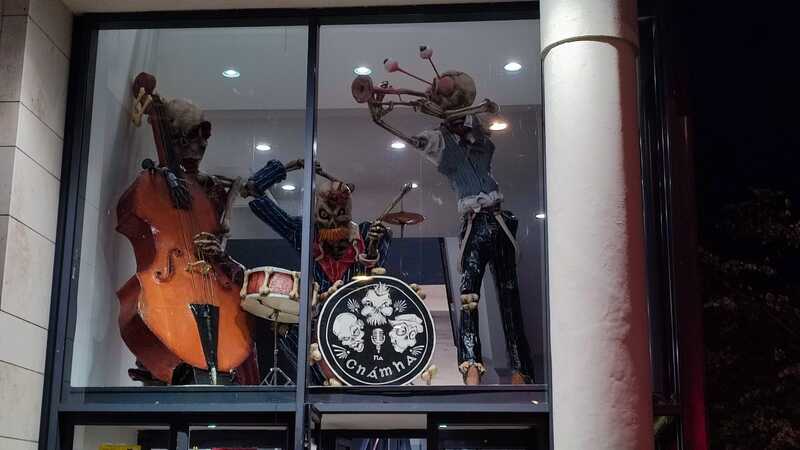 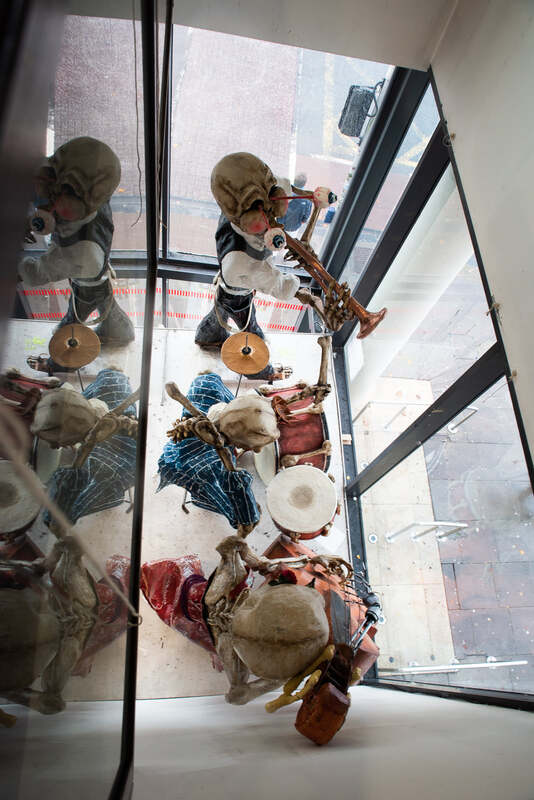 St. Peter’s Cork, a cultural centre and historic building on North Main Street, worked with CCAL to become our second base for installation. The staff there were hugely accommodating with our proposed plans, and agreed to be a space to house the sound-piece ‘Samhain Stories’. CCAL’s crew installed the artworks during the week of October 25th, and on Halloween night the front garden was used as a starting point for our Treasure Trail.

The artworks in the space included a large papier-mâché skull above one of the doors, and a collection of our tape sculpture figures, including the ‘Seanchaí’ (Storyteller.) This was the space used for the Samahin Stories installation, with many of the individuals who shared their ghost stories coming to hear themselves in the soundpiece.

The final location for installation was the Former Butter Exchange/Craft Centre in the Shandon Historic Quarter. Permission to use this space was granted by Cork City Council, and access to the Craft Centre garden was facilitated by James Nolan of Nolan’s Butchers, Shandon Area Renewal Association, Shandon Street Festival and Mother Jones Festival.
As Shandon is the birthplace of the Dragon, it was important to CCAL to continue highlighting the support and creativity of the local community and the North Side.
The various elements of the Craft Centre installation included the pillar installation, which featured the ‘Baby Dragon’ prop, and two skeletons scaling the pillars, as well as the cut-out and pasted boards.

Inside the garden CCAL’s crew created a sculpture installation, featuring sound, eerie lighting and props made from our signature sellotape as well as steel sculptures of giant birds. On Halloween night the space was used by the UCC students to perform in, acting out characters and interacting with the audience as they made their way in and around the garden. 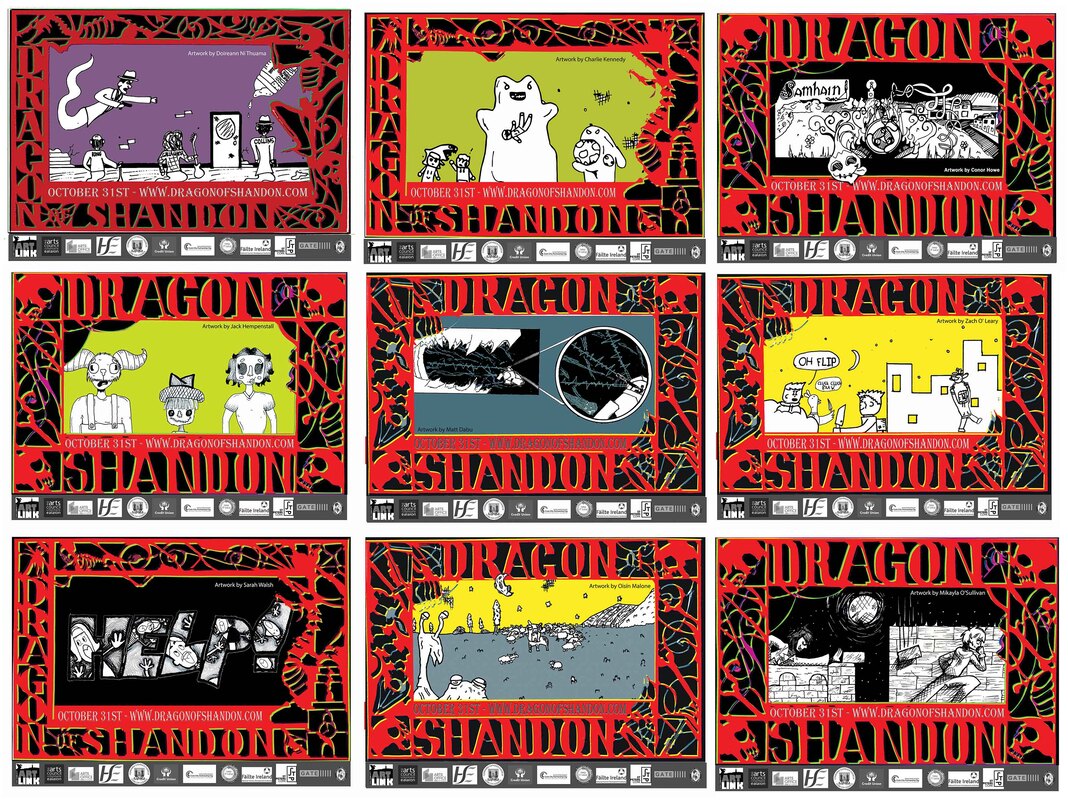 One of the major engagement elements of the Dragon of Shandon on Halloween night was the ‘Treasure Trail’. Production and planning for this began in late August, with the main goal to safely guide the public through our installations and engage families and young people in the activities. Our finalised programme was released online the week before the event, giving locations and times for performances on the night.
2,000 Physical programmes were printed, folded and distributed in the days leading to the event, which were double-sided and acted as the treasure map to follow on the night. CCAL crew and volunteers distributed them in various businesses and centres that support the Dragon of Shandon, and on the night they were given out by CCAL crew and stewards from St. Peter’s, and by the young comic makers from the ‘Comic Kiosk’.

CCAL wrote clues based around the artworks at the installation sites, and on Halloween night treasure trail participants started at St. Peters Cork, where CCAL’s crew and stewards gave out the clue sheets and explained how to follow the trail. The prizes given were on a first-come-first-served basis, and included cinema passes donated by the Gate cinema, tape-sculpture skulls created by CCAL crew and volunteers, comic books as well as Dragon of Shandon handmade badges and Halloween sweets.
​
The engagement in this part of the night was overwhelmingly positive, with groups and individuals from all age groups taking part.